What’s inside this Massive Preset Pack?

Special thanks to Franny Francisca from youtube for creating such great NI massive preset sounds, go check him out here. 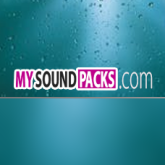 MySoundPacks was funded in 2020 to help music producers with music production-related material and resources.